Some days are milestones!  Four years ago at this time, I was transferred from Neuro ICU at the Foothills hospital in Calgary, to a regular ward bed.  It has brought back memories for me, and I feel that it is something that I need to record, for my own benefit, so as to recall the blessings and miracles that I experienced at that time.

This time was a significant transition point in my life that I have been thinking a lot about lately, and has seems to gain more meaning as the years go by.  My mind has gone back to this several times today.

Four years ago, I was a family medicine resident doing a community pediatrics rotation in Lethbridge.  It was just after Christmas, and the usually rush was on with every kind of illness you can imagine coming in. I was in emerg doing some admissions for some little ones around 11pm, finished up rather uneventfully, and prepared to leave the hospital and return to my parent’s place in Magrath which is about 30 min outside of Lethbridge.  The last thing I recall was thinking about it being a long day, wondering if I would called back in again, and looking forward to seeing my family.  I distinctly remember the pattern on the floor as I walked through the sliding door of the ED entrance.  Nothing else.  In fact, I will not really remember more than flashes here and there for the next three or so days.

I have been told that I left the hospital and started to drive home.  About five minutes before I arrived in Magrath, several deer were seen on the side of the road by a man driving a truck just in front of me.  I don’t know who this man is, or if he was the one that called 911, but EMS told me that he passed the deer, and then looked in his rear view mirror to see my lights spinning.  There is no consensus as to whether I actually hit the deer, or swerved trying to avoid them, but they did say that I rolled the car end on end about 4 times and landed in a field.

EMS was called out of Magrath, and our family friend, Karen Alston, and several others were with her.  They cut me out of the car, put me in a Cspine collar and on a spine board.  They took me right back to ED in Lethbridge and called my parents.  I have absolutely no memory of any of this, but was talking and moving all extremities.  Karen told my mom that I kept saying ‘what did I do wrong?’ and in fact continued to say that while in ED, perseverating, with obvious concussion symptoms.  My family met me after going for imaging.  Initially it was thought that I had suffered bumps, bruises, a bad concussion, and would likely take a few days to recover.  My dad and mom were in emerg with me and apparently after the docs had left, I had asked my dad for a priesthood blessing.  He told me afterwords that I was blessed that I would regain my health following this, and that the doctors involved in my care would be blessed as well.  At that point, it was thought that I would likely be going home that night.  However, the Xrays returned showing burst fractures of C6, C7, and possible fracture of C1 of the cervical spine.  These types of fractures usually result in death or paralysis from the neck down.  I was immediately prepped to head up to Calgary for Neuro assessment.  STARS was called, but it was thought that would could actually get to Calgary faster driving than flying as prep time was significantly less driving at this point.  They basically rolled me out to the ambulance in the collar and on the board.  My mom came with me, and Dad went home to get everything ready to spend time in Calgary.

My first very foggy memory was hitting a bump in the road as when arrived in Calgary and feeling shooting pain down my right arm.  Excruciating, and difficult to describe.  I was given pain meds on the spot, and I said “hi mom.”  Although I had been talking to her the whole time, this was the first time I actually realized that she was there, and then the fog came back in full force.

I remember arriving in Foothills ED, a familiar place to me, and having this sensation of severe chest pain from the impact of the seat belt, and not thinking that I could spend another moment on that spine board.  Unfortunately I needed to stay completely immobilized for a several hours yet until the neuro team could assess. I have absolutely no recollection of this, apart from hearing people talk around me, and remembering how bright the lights on the ceiling were.

I remember Dr Duplessis, the neurosurgeon on call, explaining to me what had happened.  Strangely, although I knew exactly what these types of fractures implicated, I had this overwhelming sense of warmth, calmness, and hope.  I did not feel frightened, I did not feel worried, but I do not think that my brain was really going beyond that very moment in time. The pain medications were strong, but I remember hearing him very clearly and thinking that there was no way that I would not recover from this.  I know that my family was there with me, and I know that the neuro team had decided to put me in a halo for at least the next several hours to determine if this would allow for decompression of the spine.  From what I was told, with the initial impact, my the muscles of my neck immediately tightened around the area that was fractured which prevented movement of the fractured bone, but also would make it difficult to deal with in surgery.

I foggily remember them cutting my hair, and injecting the anesthetic where the screws were about to go in my forehead and over the occipital region.  Gratefully, with the help of good pain meds, I do not remember the screws actually being placed, or apparently the crunching sound that followed as they tried to place traction on my spine.  Unfortunately there was no movement of the bones, so they removed the halo and hoped that decompression with happen with general anesthetic.

My parents stayed in nearby hotel and they said that I talked with them on the phone prior to going in to surgery.  I know that I was generally feeling calm about the experience, but I really do not remember anything that we talked about.  I do remember being wheeled in my hospital bed, and hitting the edge of the elevator which a mild degree of force, and that awful, shooting pain going down my right arm in to my hand.  They next 48 hours are a complete complete complete blank out.  I remember absolutely nothing about this.  In fact, I don’t really remember waking up, except for the fact that I was not really surprised about my surroundings, even though I had no idea where I was.  I remember responding to nurses questions, I remember my family being there, but mostly I have no visual memory of this time.  I remember having this very strange feeling during the first few evenings when I could not have visitors, of being surrounded by many different people that were all very busy going about doing something…but I would open my eyes and no one would be there.  For some reason, this feeling of having people around me was very comforting.

And then suddenly, I just kind of woke up.  I remember my parents being right there, feeling even a tiny bit hungry, and my biggest worry being whether or not I would be able to go on the humanitarian trip we had planned for Cambodia that was supposed to happen in 6 weeks. Some extended family came, and I remember my siblings being there.  My parents had basically been camping out for several more days than they had planned, and needed to go home to take care of things.  (And my baby sister had just gotten engaged and they needed to be there for her for that.)  On News Years eve, Cammie, my friend from Kindergarten all the way on up, stayed with me, talked me through the waves of pain that I was experienced and kept my spirits up.  I will never forget this.  I felt loved, cared for, and like I actually mattered.  So many people showed such love to me during this time.

I started to slowly try to push myself to be up a bit more each day, and eventually was able to walk with a walker.  I remember the nurses in the hallway cheering 🙂 and it made me so happy.  Eventually I was transferred to a regular bed where I continued to battle terrible concussion symptoms, learn how to manage with a neck brace, and try to eat.  It was tricky going at first.  There are lots of things about this time that I really don’t care to remember, but it has done more for me in understanding patient care than any training I ever received in medical school.  I was finally about to be discharged as I was able to walk down the hallway and even manage stairs one at a time using my cane, and I was told that my hemoglobin was 83….close to transfusion levels.  I have dealt with anemia most of my life, and although my levels were probably quite low before this all happened, they could not discharge me until things started to improve.  My mom was staying at my condo this whole time, and she would come and read to me at nights and just stay with me during the day.  I am so glad that she stayed with me.

Finally I was discharged home.

So many people showed so much love and kindness.  I still feel quite overwhelmed when I think about it.  I would mention everyone, but this post is already so long hehe.

A few very challenging things persisted.  I could not talk, and would not be able to, apart from a harsh whisper, for another several months.  Even when I started back on my residency rotations, after an hour or so of talking, I would just have to stop because of pain.  I had been intubated for ~12 hours, and with this came a recurrent laryngeal nerve injury.  I still can’t hit an eflat, and there are some pretty funny sounds that come when I sing in church lol.  I also had persisting numbness and tingling over my entire back, and down my right arm.  Gratefully the tingling in my hand slowly resolved, although my neck and back still put up a good fight.

This experience truly changed my life, and I know that I still don’t understand fully the life blessings that has come from this.

I know that my Father in Heaven was protecting me and prevented what probably should’ve happened, from happening.  I am grateful for retrograde amnesia.  I don’t know if I would be functioning if could remember the details of what happened.

This continues to be a learning experience for me as I learn to use my body again, and as I learn to deal with some chronic pain issues.  I has helped me to be more empathetic and caring, and grateful for the things that I can do without limitation.  I continue to learn from this everyday… 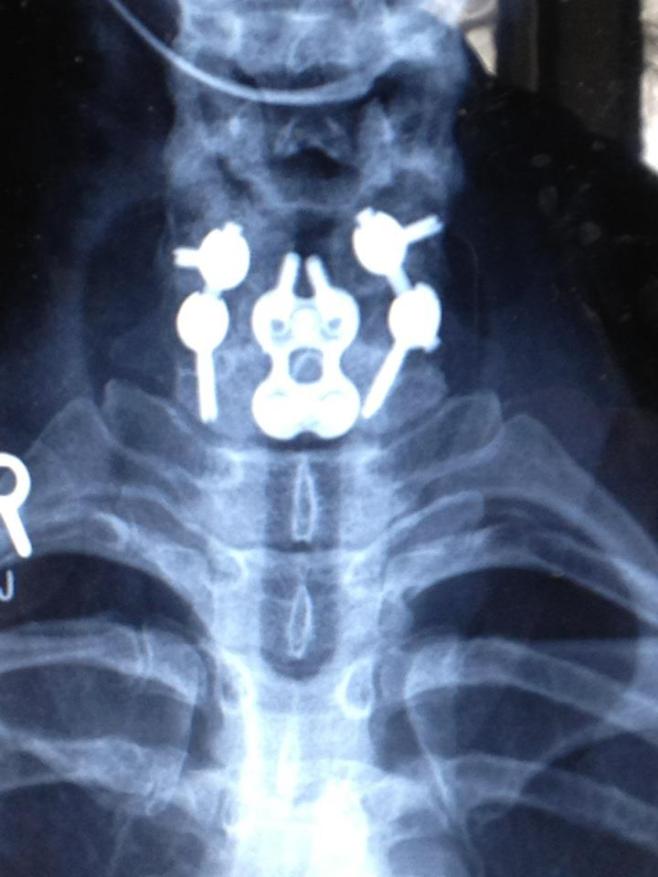